How To Succeed When Everyone Thinks You Are Failing 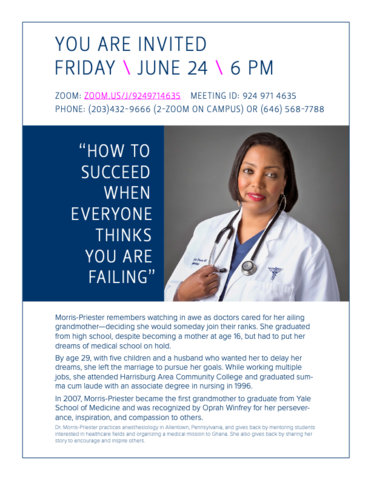 RSVP at carmen.canales@yale.edu to join Dr. Morris-Priester’s How to Succeed When Everyone Thinks You Are Failing talk on June 24 at 6PM.

Morris-Priester remembers watching in awe as doctors cared for her ailing grandmother—deciding she would someday join their ranks. She graduated from high school, despite becoming a mother at age 16, but had to put her dreams of medical school on hold.

In 2007, Morris-Priester became the first grandmother to graduate from Yale School of Medicine and was recognized by Oprah Winfrey for her perseverance, inspiration, and compassion to others.